Legend PPF has been in the U.S. market since October 2019, but we think we can still call it a “new” addition to the market. Its creator however, Dr. Tim Gerasimov, a polymer chemist, is an industry veteran who created window film and PPF decades ago for other industry suppliers. The success of the product so far, is perhaps a testament to the power of social media and good-old word of mouth.

The fact that we are not new to industry helps a lot, says Dr. Gerasimov. His new company Bluegrass Protective Films, was formed with other chemists and engineers who Dr. Gerasimov says all have more than 100 years combined experience in the market.

“When we started last fall, a lot of potential customers said, ‘We never heard about you,’ but after a few months the word was spreading on social media,” he said, adding that some who sold PPF were willing to try it. “All of this is good publicity,” he adds.

It didn’t hurt when Ron Harris of the PPF Academy stumbled on the film and tried it out on social media and gave positive reviews.

“We got calls on our sales lines from people who we never approached,”’ says Kurtis Mishler, vice president of marketing and sales.

Though the growth has been positive, when COVID-19 hit, it certainly wasn’t good news for any supplier, though Dr. Gerasimov, says the company did put measures in place to be prepared as far as raw materials and that definitely helped.

“But in April there was a lot of fear in the country in general,” he says. “A lot of installers shut down because they couldn’t justify being essential. Then people started losing jobs, so they aren’t looking at PPF and PPF is also related to car sales so April was a scary month. But in May we saw rejuvenation on that side of the industry and our sales domestically doubled month after month as people got cabin fever and started looking into window film and PPF.”

For more on this story, see the upcoming all issue of PPFMag.

The competitions will be held on January 12-14, 2021 at the Orange County Convention Center in Orlando, Florida. There is no other venue where you can find the depth of education, networking, and products displayed as you can at the 2021 International Window Film Conference and Tint-Off™. Competition deadlines are approaching and you won’t want to miss out, register today at wfctevent.com. 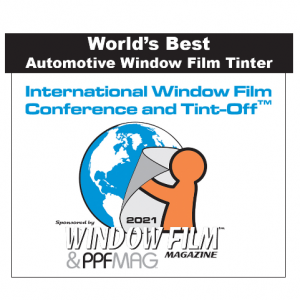 The Automotive Tint-Off™ identifies the film installer who performs the highest quality automotive window film application in an efficient and expert manner. 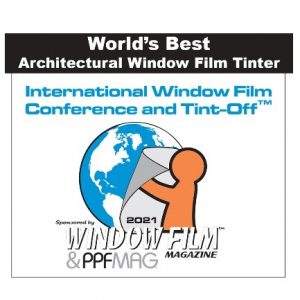 The Architectural Tint-Off™ identifies the film installer who performs the highest quality film application to a specified architectural glass frame in an efficient and expert manner. 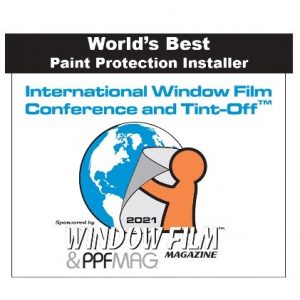 The Paint Protection Film Competition identifies the installer who performs the highest quality paint protection film application in an efficient and expert manner.

The full schedule is available at wfctevent.com or click here. Competitor meetings will begin pre-event on Monday, January 11, for those participating in the competitions later in the week. The educational program begins at 8:00 a.m. on Tuesday, January 12, and contains a general session track as well as Paint Protection Film track that day providing more than 12 hours of educational insight between the two tracks, followed by the WFCT exhibition floor being open from 2:00 – 7:00 p.m. that day.

Hours for educational programming will continue on Wednesday from 8:00 a.m. – 1:15 p.m. and Thursday, from 7:00 a.m. – 10:45 a.m. and 1:00 p.m. – 3:00 p.m. Topics that will be addressed range from outsourcing, training, business operations, ceramic coatings, technology, marketing, sales strategies and much more. All speakers will be live in Orlando sharing their expertise.

Demonstrations will be held all three days of the event and will cover extensive wrap demonstrations, safety films testing and usage and thinking outside of the film box.

Plan now to be a part of this event to benefit from this hard-hitting program. Register at wfctevent.com for the live event, or if you are unable to travel, select the Full WFCT@Home registration option to view the educational sessions in a virtual setting.

After over 31 years tinting and 15 years working with paint protection film (PPF), Chris Brooks, Kauffs Tint & Wraps owner, says nothing is too difficult for him.

That’s what Brooks says he loves most about his job: it is always new. Just like the brand new 2020 Tesla Y and Navigator for which he and his team did tinting, PPF and ceramic coatings this summer.

With the Tesla Y, Brooks says the only difference was that it was a brand new body style so they didn’t have a pattern already out, but since they cut both the tint and PPF in their shop it wasn’t much of a challenge. Brooks says nothing is hard for him anymore, it is just a little more time.

“Ten or 12 years ago I’d hurry up as fast as I could to get them out,” Brooks says. “Now I’ve gotten a little older and wiser and realized that you do things at a certain pace so that your customers trust you and that’s how you get to working on cars that are $200,000 up to boats that are millions.”

Brooks summed up that the Tesla Y and Navigator took about two days total to do all the tint, PPF and ceramic coatings. And according to Brooks, most Tesla models are fairly flat among other things that make the job easier and faster.
Because of his experience, Brooks says a $20-million boat doesn’t even phase him, but for someone who has never worked on a high-end car he says take a second to get some advice and asses the job before jumping head first into what could be a bad situation.

“There are so many people who pull door panels, and pull trim out, and pull glass out,” Brooks says, “I don’t think window tint was supposed to be done that way but a lot of people were shown to do it that way and think it’s the only way to do it. Twenty years ago was probably the last time I pulled a panel on a car.”

Brooks says he uses LLumar products for almost all of his jobs including both tint and PPF because he’s spent years using its products and likes its warranty policies.

Brooks has won several awards at the International Window Film Conference and Tint-Offs (WFCT), and will be participating as one of the judges for the competition at the 2021 event.

With temperatures soaring across the U.S., the Occupational Safety and Health Administration (OSHA) reminds companies to protect workers during heat exposure, both indoors and out. In the window film industry, tinters are busy doing installations, and in window film plants they often deal with hot and muggy conditions.

Millions of U.S. workers are exposed to heat in their workplaces, says OSHA. Although illness from exposure to heat is preventable, every year, thousands become sick from occupational heat exposure, and some cases are fatal.

According to Elizabeth Dillion, Maxpro Manufacturing sales and marketing executive vice president, the company’s customers and installers alike mostly talk about drinking lots of water and getting plenty of rest at night.

Occupational risk factors for heat illness include heavy physical activity, warm or hot environmental conditions, lack of acclimatization, and wearing clothing that holds in body heat, according to OSHA.

Hazardous heat exposure can occur indoors or outdoors, and can occur during any season if the conditions are right, not only during heat waves, OSHA warns. Following are some tips on protecting against the heat.

For additional guidance on how to protect you and your employees from heat stress, click here.